The following is a 1,000-word data-based essay by Yossi Gestetner:
In recent years, claims arose that Hasidic Yeshivas are generally non-compliant with New York State education standards and that many Yeshivas are not adequately preparing their male students for the workforce. I will address those two claims respectively.
According to New York State law, private school students must receive an education that is at least “substantially equivalent” to an education given in public school. If a few dozen Yeshivas fail to do so, as claimed by Yeshiva opponents, then the New York State Education Department (NYSED) could have issued a memo clarifying the definition of "substantially equivalent." However, a court ruled that the changes sought by NYSED are so monumental that they need full public comment; a process used when government wants to change laws and regulations. Basically, it’s only because of these monumental changes that Yeshivas may be deemed as non-compliant which means that without those changes the Yeshivas in question are following the law.
Let's evaluate the quality of a Yeshiva education. Hasidic boys as young as nine years old attend school for nearly 10 hours a day during school days which is substantially longer than public school students. Judaic studies in Yeshiva encompass the disciplines of history, geography, and mathematics. Later in the day, Yeshiva curriculum includes English instruction and science. Those subjects are taught in multiple languages including Hebrew, Yiddish and English. As such, Yeshiva students are exposed to the core topics required to earn a General Equivalency Diploma (GED). Detractors of Yeshivas use the term "religious" studies to suggest that the day is packed with reading stories rather than also including all of the above GED-like topics. Granted, Yeshiva curriculum and public school curriculum are distinct, but the State standard merely requires them to be "substantially equivalent;" not "substantially identical."
Now let's move to the claims regarding student-outcomes, which involve two separate areas of review. Detractors claim that Yeshiva graduates lack knowledge compared to their peers in public schools. But a survey of thousands of New York adults conducted in early 2019 for the Woodrow Wilson National Fellowship Foundation shows that 60% scored an ‘F’ on a civics test whose questions are similar to the U.S. Citizenship Test. Most New Yorkers are educated in public schools; not in Yeshivas yet the results are horrendous. Moreover, colleges have prerequisite classes due to the many non-Yeshiva students lacking basic education by the time they finish high school. As such, what is the surprise if some Yeshivas have this outcome too? Moreover, institutions of higher education were founded precisely because the grade school education system attended through the age of 17 does not sufficiently prepare everyone to earn a better living. So, once again, what is the surprise if Yeshivas that are attended through the age of 17 also leave some students in need of more education?
The second part of the outcome-focused claim pertains to income and poverty. Many people point to the fallaciously-calculated Poverty Rate within the Hasidic community as an outcome that demonstrates the alleged inadequacy of a Yeshiva education. In truth, however, people with decades of experience in the workforce earn more than double than their younger counterparts across education levels. For example, when the head of householder is above the age of 45, median income is above $75,000 in New York, but when the householder is under the age of 25, media income is only in the $31,000 range. This discrepancy is significant because only 2.6% of households across New York are run by those who are under the age of 25, but as much as 22.5% of households in Hasidic-populated Kiryas Joel (in Orange County, New York) are run by individuals who are this young. On the flip side, most households statewide are run by those who are above the age of 45 and thus are in the full earning age, but only a small portion of KJ households are run by people in this age group. No amount of curriculum changes will alter the fact that the Hasidic demographic is young and it thus substantially diminishes their income due to age. 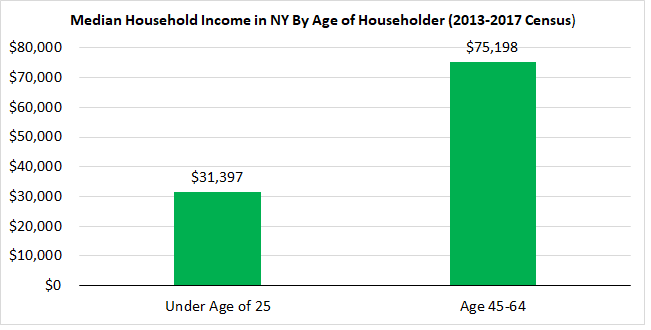 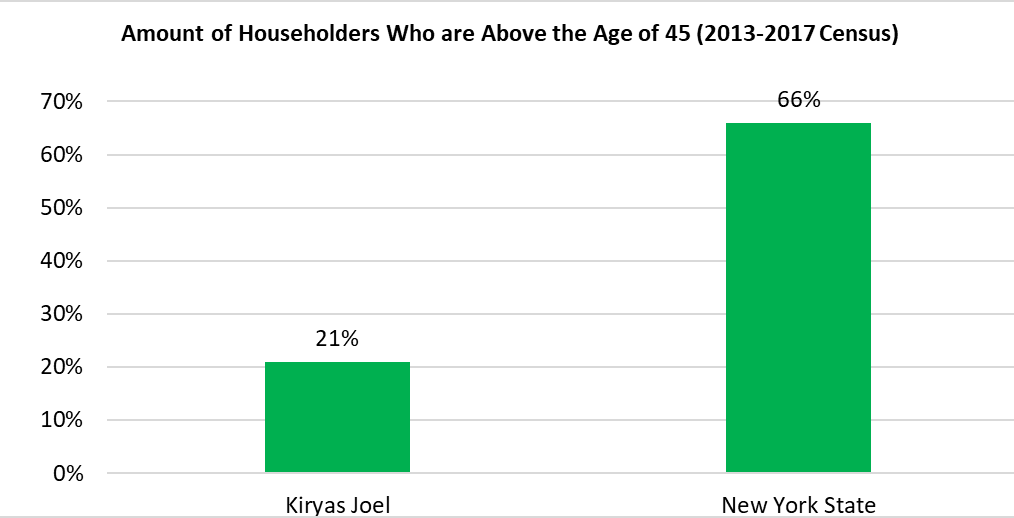 The young Hasidic demographic also means that households contain an above-average number of children. This elevates the Poverty Rate because the rate measures household income relative to household size. Consequently, a larger household will be classified as poor even when it earns a higher income. Indeed, poverty rates in the Hasidic community plummet in households that are led by those who are 60 years of age or older, and the Rate for this demographic is identical to the Poverty Rate of the same age group within other geographic areas. Why? Because at the 60+ age milestone, Hasidic men have overcome the economic obstacles associated with a young person's income, and their household size has shrunken given that their children have grown up. Hasidic men of this age group are Yeshiva graduates; in large part immigrants for whom English is a second language. They are living proof of an empowering and successful education system/
In summary Yeshivas meet the "substantial equivalency" standard and will continue to do so if the State Education Department does not upend the decades-old, legally accepted standard and if the Legislature does not change the law. As for workforce preparedness, those who attend public school are terribly unprepared as evident by the survey demonstrating that 60% of New York adults failed a basic civics test, and by the fact that many people attend colleges only to better prepare for the workforce. As for income and poverty rates, the young age of the Hasidic community means less income for some and it also skews the poverty numbers among Hasidim as indicated by contrasting poverty rates among young Hasidim versus the rate among seniors. With these factors in mind, there is no merit to the claim that Yeshivas are generally not compliant, and there is no excuse for NYSED to impose monumental changes upon Yeshivas.
Yossi Gestetner is the co-founder of the Orthodox Jewish Public Affairs Council (OJPAC). The stats in this article are from the 2013-2107 American Community Survey 5-Year Estimate released by the Census and from the NYC Population Fact Finder whose reports are based on Census data.