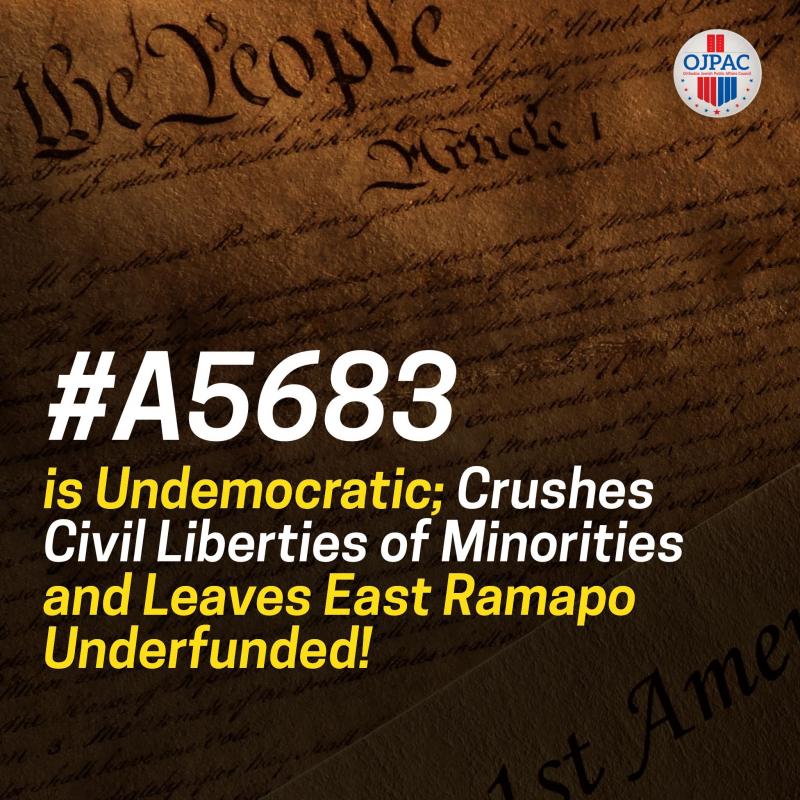 A proposed bill by Assemblyman Ken Zebrowski calls for the appointment of a monitor armed with veto power over the democratically-elected board of the East Ramapo Central School District in Rockland County, NY. The language of the proposed bill allows the monitor to override the board on 1) hiring of a school district superintendent; 2) actions the monitor unilaterally determines are inconsistent with the district’s academic goals; an abstract criteria which may include anything and everything, and 3) collective bargaining agreements.

The last item is of a particularly egregious nature as the bill includes a provision that the Commissioner of Education can override all monitor vetoes except where it relates to collective bargaining. Basically, Mr. Zebrowski wants to empower an unelected bureaucrat to force the ERCSD Board to sign employee contracts without any person or committee having the ability to override the undemocratic monitor.

It is important to note that the state’s funding formula shortchanges East Ramapo by many millions of dollars annually, yet Mr. Zebrowksi’s bill does nothing to give East Ramapo public schools the necessary funding, nor does the bill correct the formula. (In short, the State allocates funds to each school district based on a formula that looks at public school enrollment relative to a district’s assessed property value. However, a district that has a large private school community appears wealthy due to the mass amount of property that does not have the usual corresponding public school enrollment with it. This leads East Ramapo and a handful of other districts in New York to look wealthier than they are, causing those districts to lose millions of dollars in annual state funds.)

Since 2016, East Ramapo has had state monitors on the ground with the power to report to the state any potential illegal or unethical behavior. This is on top of the built-in mechanisms by the state’s Comptroller and Education Department to detect and correct potential wrongdoings in school districts. Imposing a veto-powered monitor will disenfranchise the majority minority voters in the district of nearly 40,000 students, and it won’t address the state’s shortchanging of minority students in the public system - all while forcing the district to accept employee contracts whether or not there is adequate funding for them.

Sentiments in East Ramapo have calmed substantially in recent years due to the continued hard work of the school board, voters, taxpayers and area lawmakers. Assembly Bill A5683 proposed by Mr. Zebrowski, who represents only a sliver of the district, does not correct the prime remaining issue of funding, and the bill crushes the civil liberties of local voters by making their annual school board vote meaningless.

OJPAC strongly rejects Ken Zebroswki’s undemocratic bill that inflames a deescalated situation without providing the funding relief still necessary to help a school system that is mostly outside his assembly district. OJPAC continues to support increased state funds allocated to the public school system; a position that OJPAC has advocated for since 2014.

STATEMENT on Odd Cuomo Line as to Why There is Outrage