Just as it is important for media and the general public to understand the way of life of the Orthodox Community and treat them as regular citizens, it’s equally important that the Orthodox Community understand our neighbors amongst whom we live.
Recently OJPAC sponsored a seminar in Monsey, NY where cultural issues and sensitivities toward African Americans and other ethnic groups were explored. 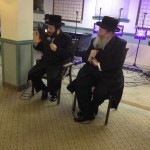 Recently OJPAC sponsored a seminar in Monsey, NY where cultural issues and sensitivities toward African Americans and other ethnic groups were explored.
The logistics of the event, attended by many dozen members of the Rockland Orthodox Hasidic Community, was put together by Shimon Rolnitzki a highly regarded Hasidic Yiddish language Journalist and publisher. Part of the event featured panelists Yosef Rapaport, a well-known Hasidic Journalist and commentator and Rockland County Legislator Mr. Aron Wieder. Both spoke about the need for the Hasidic community to be pro-active in countering extremely negative media coverage of the Orthodox Hasidic community.
“We live in a multi-cultural multi-ethnic society – they are our neighbors” Rapaport told the gathered. “We depend on our neighbors’ good will every day; be it at the voting booth or in the Jury room, insensitive behavior is poisoning the well we must drink from.”
Rockland County Legislator Mr. Aron Wieder related how he when he knocked on doors seeking election he turned frosty welcomes into long lasting friendship. “Only when our community shows concern and care for our neighbors, can we expect good will and reciprocity,” said Wieder.
Being that many in the Orthodox Community are sometimes isolated from the general culture, some unintended insensitive comments or behaviors by those who are unaware of their impact can result in damaging good relationships. Panelists presented hypothetical situations and dissected the historical meaning of particularly hurtful words and terms.
“I am so glad that OJPAC organized this event” said Yosef Rapaport after the event, adding that. “Our community must be in the forefront in being sensitive to others.”