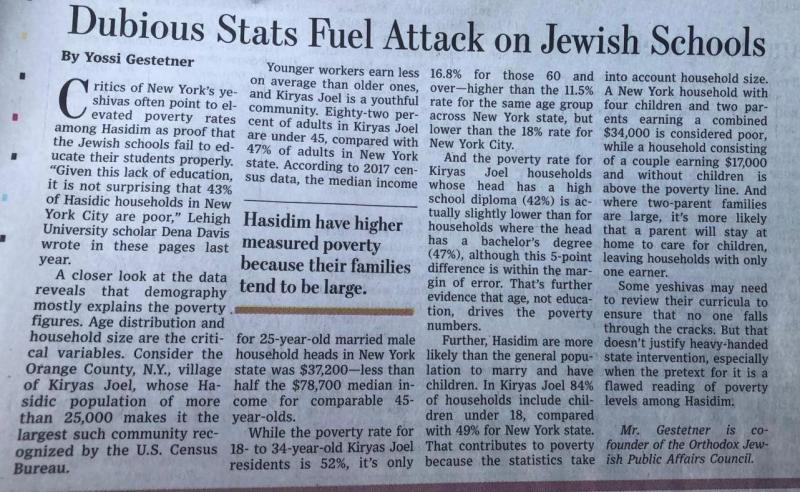 Critics of New York’s yeshivas often point to elevated poverty rates among Hasidim as proof that the Jewish schools fail to educate their students properly. “Given this lack of education, it is not surprising that 43% of Hasidic households in New York City are poor,” Lehigh University scholar Dena Davis wrote in these pages last year.A closer look at the data reveals that demography mostly explains the poverty figures. Age distribution and household size are the critical variables. Consider the Orange County, N.Y., village of Kiryas Joel, whose Hasidic population of more than 25,000 makes it the largest such community recognized by the U.S. Census Bureau.Younger workers earn less on average than older ones, and Kiryas Joel is a youthful community. Eighty-two percent of adults in Kiryas Joel are under 45, compared with 47% of adults in New York state. According to 2017 census data, the median income for 25-year-old married male household heads in New York state was $37,200—less than half the $78,700 median income for comparable 45-year-olds.While the poverty rate for 18- to 34-year-old Kiryas Joel residents is 52%, it’s only 16.8% for those 60 and over—higher than the 11.5% rate for the same age group across New York state, but lower than the 18% rate for New York City.And the poverty rate for Kiryas Joel households whose head has a high school diploma (42%) is actually slightly lower than for households where the head has a bachelor’s degree (47%), although this 5-point difference is within the margin of error. That’s further evidence that age, not education, drives the poverty numbers.Further, Hasidim are more likely than the general population to marry and have children. In Kiryas Joel 84% of households include children under 18, compared with 49% for New York state. That contributes to poverty because the statistics take into account household size. A New York household with four children and two parents earning a combined $34,000 is considered poor, while a household consisting of a couple earning $17,000 and without children is above the poverty line. And where two-parent families are large, it’s more likely that a parent will stay at home to care for children, leaving households with only one earner.Some yeshivas may need to review their curricula to ensure that no one falls through the cracks. But that doesn’t justify heavy-handed state intervention, especially when the pretext for it is a flawed reading of poverty levels among Hasidim.Mr. Gestetner is co-founder of the Orthodox Jewish Public Affairs Council.