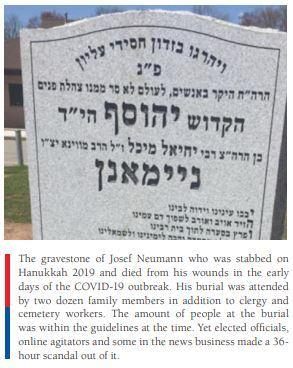 The most disgusting example of how some people singled out Orthodox Jews in the early months of the COVID-19 crisis is probably the reactions to funerals. According to New York State’s guidelines that were issued March 17th, funerals could take place.
There was indeed a limit of 50 people or 50% capacity inside a funeral home, but there was no limit on how many people can participate in funeral or burial proceedings outdoors. In updated guidelines dated April 10th, the state said that “if in-person services must be held, the gathering should be limited to only immediate family, with as few persons physically present as possible.” This was a recommendation, not an enforceable rule, and this sure did not ban small funerals attended by family members.

Despite the fact that there was no ban on funerals, and despite the fact that a funeral is a one-time moment for loved ones to share their goodbyes, funerals in the Hasidic Community – even relatively small ones – were made into a lead target by media members and government officials. In the meantime, golfing was permitted in New York State (except for one week) but there was no hysterical outrage about that.

Here is one example: Monsey resident Josef Neumann was stabbed during a Chanukah event on Dec. 26, 2019. He died from his injuries in the evening of March 29th; which was before the updated funeral recommendations were made. Between siblings, children, grandchildren, nephews, and nieces, he would probably have over 100 close family members at his funeral during any other time. Because he was a terror victim, he would undoubtedly also have thousands of community members participate if the circumstances were different. Due to the lockdown, however, Mr. Neuman only had about 30 family members at his burial. They properly distanced during the pre-burial proceedings. However, for the few minutes that it took to manually lower the casket into the ground, the partial family stood together to physically bury their father/grandfather. Photos of this moment went out online and turned into a big media story in the Lower Hudson Valley region. The photos were shared all over social media and the county executive of Rockland was busy with it too. In fact, he contacted the local Police Department before the funeral saying he is concerned that a large funeral will take place.

Let us take a step back for a moment. We are dealing with a terror victim, one who died from a domestic terrorist act in Rockland County - someone torn away because of hate. Yet because he’s Hasidic, a part of his family - only part, not all of them, not all his friends, not the entire Jewish community – were denied the ability to lower him into the ground without it turning it into a 36-hour controversy involving Facebook posts, comments, TV stories, print news items and statements from elected officials across the county. This is reprehensible; especially when one considers that it did not violate any rule!

This behavior by elected officials, some reporters and social media rabble rousers was not out of concern about the virus spreading, because golfing which can wait a few months, was allowed. In addition, only 200 feet away from the cemetery where Mr. Neumann lays buried, there is a non-Jewish cemetery. They had daily funerals and burials attended by dozens of people but there was no scandal, no controversy, no media, no social media, and no government actions and reactions.

Speaking of Rockland County, a 50-year-old Hasidic man died from coronavirus. His body was brought in front of his home so that the family can say their goodbyes. He left behind many children and in-laws. A local government employee passed by, took photos to post it online and sent it to the county as well. A county inspector came by and left a $2,000 fine at the widow’s doorstep. The inspector cited two violations: One, the widow arranged a large gathering, and second, that people did not properly social distance at the event. According to the complaint there were about a dozen people there.

It takes an unprecedented level of cruelty to describe a funeral as arranging an event. Besides, the state rules indicate that funerals are not under the category of “events” that were barred. How can any reasonable person expect that a grieving widow should spend time to ensure that people, mostly her family who do not need to distance per rules, are standing apart? Even if she could have somehow encouraged it, those individuals should be the ones ticketed instead of this widow. This is just another example of how such a basic human need like saying goodbye to a loved one, was ripped away by media outlets, social media instigators and government officials in Rockland County and elsewhere.

This takes us to the funeral in Brooklyn that received lots of negative attention. A large funeral for a senior Rabbi took place in Brooklyn in late April. It was arranged in advance that masks will be handed out. Indeed, photos of the event showed masks being worn by most people in attendance, and most individuals were properly social distancing too. However, during the event, the police started pushing the crowd in various directions which caused the distancing to abruptly end. At the same time, the mayor of New York City, a mayor of 8.5 million people, a mayor of a city where lack of social distancing took place every day at parks and at stores, decided to show up. In a tweet read around the world, the mayor said, “My message to the Jewish community, and all communities, is this simple: the time for warnings has passed.”

When we at OJPAC saw the story, we instantly pointed out in memos to reporters, tweets, and messages to fellow community leaders, that on that very same day a military flyover took place over NYC and parts of New Jersey. Thousands of people stood close together watching the show; many of them without masks. The mayor was nowhere to be found around these gatherings; he did not even tweet that people should socially distance. Yet, on the same day he went crazy about a funeral.

The early action by OJPAC to point out this great hypocrisy led to nearly all media stories sharing this double standard. The accomplishment here was twofold: One, it showed the world that lack of social distancing is not a matter exclusive to Hasidim; everyone does it one way or another. Secondly, it helped illustrate the shameful level of targeted focus and enforcement that the mayor put on Hasidim.

At his press conference the next day, the mayor was asked why he chose to focus on one event over the other. He tried to suggest that the funeral was worse because it was an organized event. The flaw in this reasoning is obvious, as the flyover was also organized, but more importantly, the virus does not care how an event came about. It transmits from one person to the next the same way. In addition, as mentioned above, the state never banned funerals so holding one as an ‘organized event’ should have been a complete non-factor. Finally, the mayor’s total embrace of protests a few weeks later with no regard for distancing illustrates that the mayor is not really concerned about large events.