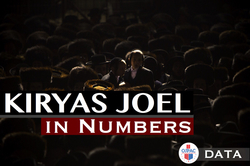 While the Village of Kiryas Joel in Orange County, New York is not necessarily representative of Hasidic communities elsewhere, it is the only large Hasidic community to be quantified by the Census. Here are some Census data-based answers to questions that people may have about Kiryas Joel.
1) What is the education level in KJ? Answer: 63.2% people age 25 and above have high school diplomas or a higher education compared to 85% people this age group statewide.
2) What percentage of Kiryas Joel is employed? Answer: 47% people age 16 or above compared to 57% statewide are employed, but as a percentage of its population KJ has more teens and young adults than the rest of New York: 80% KJ households have children under the age of 18 compared to only 18.8% households statewide. The older teens-young adults age groups (of which KJ has an outsize number) are less employed than settled adults. Therefore the percentage of Kiryas Joel age 20-25 or above employed is higher than what the state data suggests.
3) Do Women in KJ work? Answer: Yes, 30% of them are employed.
4) If almost all KJ households earn an income, why are many households dependent on government healthcare? Answer: A family of six people (the average family size in KJ) can earn $52,000 annually and qualify for full free medical care. In addition, a family of 6 can earn up to $114,000 annually and receive healthcare for the children at only $45/month per head through what was known before Obamacare as Family/Child Health Plus. In total, 79% people in KJ have some form of publicly-funded healthcare; including Medicaid, Medicare and Family/Child Health Plus.
5) How does a village with a poor population afford well-built community buildings? 13% households in KJ earn more than $75,000 annually, and the better earners give charity. In addition, wealthy donors from outside the village assist on a communal basis.
6) How does a poor community have many nicely kept housing units? Answer: There are run-down houses in KJ as there are in every village. Secondly, 66% of KJ households live in rentals (compared to only 46% statewide) and these properties are - to the credit of the landlords - well maintained. Thirdly, 39% of housing units in KJ were built the last fifteen years and another 25% units were built in the 1990's; hence the newer look.
7) How do people in KJ afford vehicles? Answer: Only 43% households have vehicles available compared to 71% households statewide. In addition, 25% statewide households have two vehicles available compared to only 3% households in Kiryas Joel.
8) Poor communities usually have higher than average crime rates. How does KJ have lower crime rates than even affluent communities? Answer: Strong family structures explains a lot. 93% KJ households are families compared to only 64% statewide. In addition, 88.6% KJ households are "married couple families" compared to only 44% statewide.
9) Why does the Kiryas Joel Village Union Free School District  spend much more per pupil than most other districts? Answer: OJPAC is not familiar with how the Kiryas Joel Village Union Free School District is run, but the students enrolled in the public school in Kiryas Joel are mostly children with special needs; therefore there is higher cost per student. In addition, the per-pupil data from the state divides the overall school budget only between the public school enrollment, but it ignores the fact that the school district pays for transportation and books to private students too. (In the 2013-2014 school year, 10,760 students were enrolled in private (10,422) and public (338) schools in Kiryas Joel according to data from the New York State Education Department. The district’s budget was $23,156,616 or $2,152 per student. If the 10,760 students in private schools were enrolled in the public system instead, it would cost taxpayers upwards of $203 million a year. This is based on the calculation that in 2013-2014, taxpayers paid more than $19,500 per each public school student in New York.)